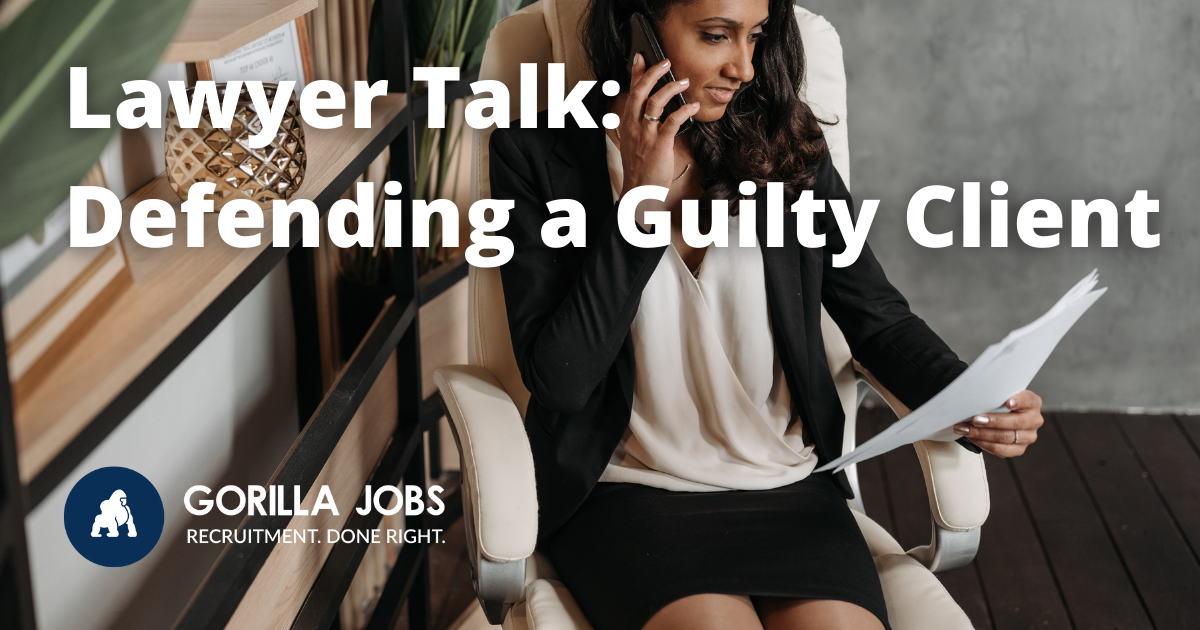 When it comes to a client’s guilt or innocence, ethics lies at the heart of how to go about your legal job to represent them.

The central premise pumping through the beating heart of our legal system is to ensure the law and justice are upheld. Every day, defence lawyers enter court rooms or proceedings or client interviews with this in mind, but for some, they also know or soon learn something else – that their client is guilty.

The predominance of Hollywood legal dramas and legally-focussed TV shows means that the public potentially misunderstands the reality of this because they have watched drama after drama where a lawyer gets a guilty client off due to a technicality or defends the indefensible. Which seems dodgy but makes for great drama!

Cut to the real world where every case isn’t a murder or assault or some huge corporate fraud, and the reality is ordinary people commit crimes, big and small, knowingly or otherwise, and it is their right to the presumption of innocence and due process that sees they are defended by a lawyer to represent them. And, ultimately, guilty or otherwise, it’s the defence lawyer’s legal responsibility to defend their client up against the prosecuting lawyer whose task it is to prove guilt beyond reasonable doubt.

However, defence lawyers are still bound by strict rules that dictate how they conduct themselves in situations where they know their client is guilty.

The key principle a defence lawyer works to with a guilty client is that they must never lie or knowingly mislead the court.

Sounds simple enough – lawyers understand their professional integrity is on the line and that they work within a system where truth is important. However, as every law student learns early on, there are a set of ethical standards that must be upheld.

Primarily, these are their duty as an “officer of the courts”, so the principles of justice and supporting the functioning of the court are paramount. This means that while a client, guilty or otherwise, is owed a lawyer’s loyalty, this is subject to the lawyer’s obligation to the courts and justice.

Each state or jurisdiction has its own more detailed set of ethical standards that further outline how a lawyer should conduct themselves, such as this “Statement of Ethics” by the NSW Law Society.

What does this mean for a guilty client?

When a lawyer is made aware that their client is guilty, often by client admission, there is nothing ethically to stop the lawyer representing them. In fact, this defence is critical for the healthy functioning of our legal system because it is a lawyer’s job to develop a defence strategy around a legal framework, not to judge their client.

However, a lawyer who is aware of guilt cannot use the notion of potential innocence in their arguments, instead relying on trying to build the case that the prosecution’s case around guilt is not sufficient to suggest it is beyond reasonable doubt. This might sound slightly “slippery” – guilty means guilty, right?

While the law is often seen as black and white, there are shades of grey, and even though the same laws apply to all of us, the circumstances of each case differs, meaning the law can be applied with some nuance.

There is also the critical difference between factual and legal guilt. In a nutshell, factual guilt refers to what the defendant did whereas legal guilt is what the prosecutor can prove.

Given our legal system is built on the very high standard of the presumption of innocence until guilt is proven beyond reasonable doubt, it is up to the prosecution to meet this standard more than whether a person actually committed an offence.

Refusing to defend a guilty client

Of course, there are circumstances under which a lawyer may refuse to defend a client they know is guilty.

The most common situations where this occurs is when a conflict of interest arises (for example, the defence lawyer has some professional connection to the opposite party), where prior commitments prevent them from defending the client or where they identify the case as being beyond their level of expertise.

Notably the lawyer must:

Once the case has commenced, it’s highly unusual for a lawyer to withdraw, however, each jurisdiction has legislation outlining how a lawyer should proceed if a client admits guilt but wishes to plead guilty.