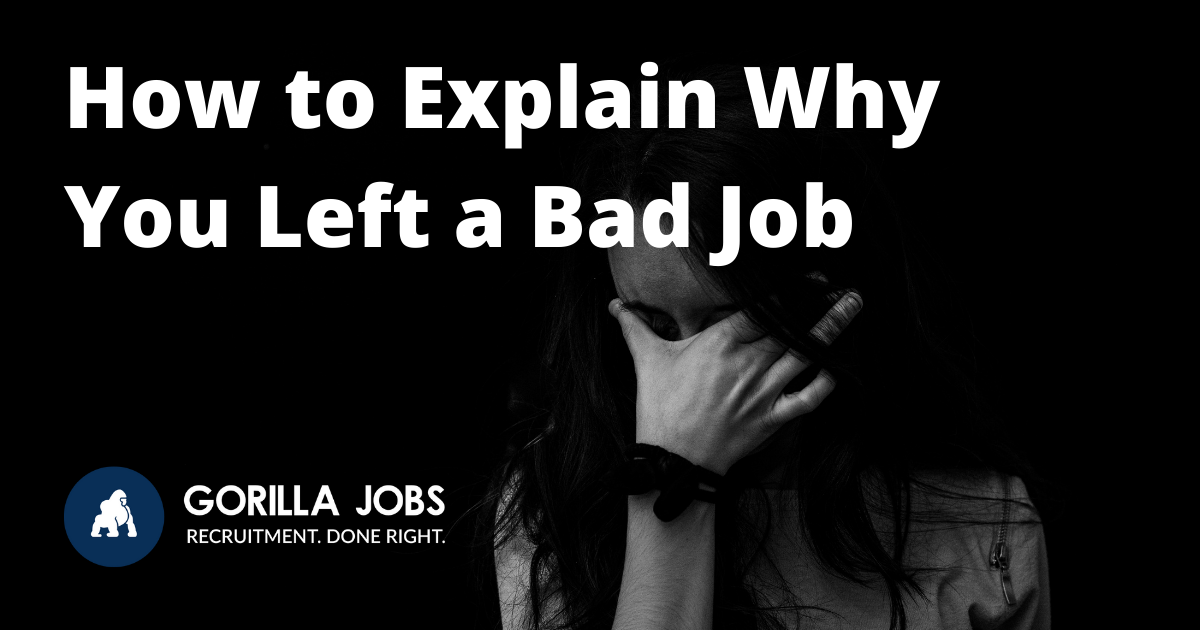 Recruitment 101: How to Explain Why You Left a Bad Job

We all leave jobs for different reasons, but explaining why you left a bad job in an interview doesn’t have to be awkward.

At some point in the recruitment process, even as early as the cover letter, it’s likely that you’ll be asked why you’re leaving your current role.

While it could be as simple as you’re looking for new opportunities, you want to advance your professional knowledge, you’ve always wanted to work for the organisation you are applying to or simply that it was time for change, sometimes the answer isn’t so straightforward.

This is most often the case when you have either left a job you felt frustrated in – that had effectively ‘gone bad’ for you – or a job you were fired or made redundant from.

However, rather than skate around the truth about leaving a bad job or freeze like a bunny in the headlights when the question is asked, there’s a way to handle it and still impress your potential future employer. Here’s how.

Your initial response to handling a poor previous job experience may be to try and avoid it altogether by removing it from your CV or LinkedIn profile.

The problem with this is that if it was your most recent role, there is suddenly a noticeable gap in your employment history that will probably be harder to explain than the job and why you left it. And it’s not a great idea to ‘get creative’ and call the gap a ‘time-out’ or similar because chances are you might get caught out by a prospective employer or recruiter who does background research on you and discovers the truth.

Point being, you don’t want to be seen as dishonest, something an employer is far more likely to pass over for a role than wading through the specifics of the bad job you left. So, the solution is to own it and find a way to talk about it when it comes up.

How to explain leaving a bad job or work culture

The first thing you can do is to embrace the fact that you’ll be asked about the bad job and prepare in advance. Write up some talking points by doing a frank assessment of the pros and cons of both the role and the organisation you left. And, even if things had turned really sour by the time you decided to move on, there probably was a time when it wasn’t so much like this.

Maybe leaving a bad job was more about the work culture or management style not being the right fit for you. Or possibly it was something more like the structure of the organisation whereby you had no room to develop or grow, or that there were no opportunities to train or upskill.

Prepare an honest assessment of your previous role and practice how you’ll approach talking about it if asked.

The key to moving past this tricky interview moment is to keep it brief, succinct and professional while remaining as objective as possible.

Be upfront but don’t go into too much detail and definitely don’t make it personal with regards to former colleagues or management. Keep the focus on yourself rather than anyone else.

Rather than get too caught up in the negatives, pivot instead to positive aspects of the role and what you liked about it, while also briefly touching on how you managed the less-than-favourable work situation and what you could have done better to navigate it, which illustrates your desire to grow via the learnings you took from it.

Move the conversation to now

Once you’ve tackled talking about why you left the bad job, it’s time to move on and show your prospective employer you are forward-looking (solution-oriented) rather than too stuck in the past (problem-focused).

Flip from talking about the poor work culture you felt stuck in or the hostile management environment that prevented you doing your best work and instead talk about the optimal work scenario that helps you perform well and that you hope you’re coming into.

You might also use this moment to talk more about the positive aspects of your last role and how they relate to the role you’re being considered for, further illustrating the skills you bring.

Above all else, be honest and respectful

Remaining honest and respectful about the reasons for leaving a bad job may be tricky if you left under a dark cloud of some sort, but a future employer will ultimately look more favourably upon you if you keep your head high in this way.

As with any aspect of the recruitment process, show them the best side of their potential future employee by building a positive narrative about why you are the right person for the role.