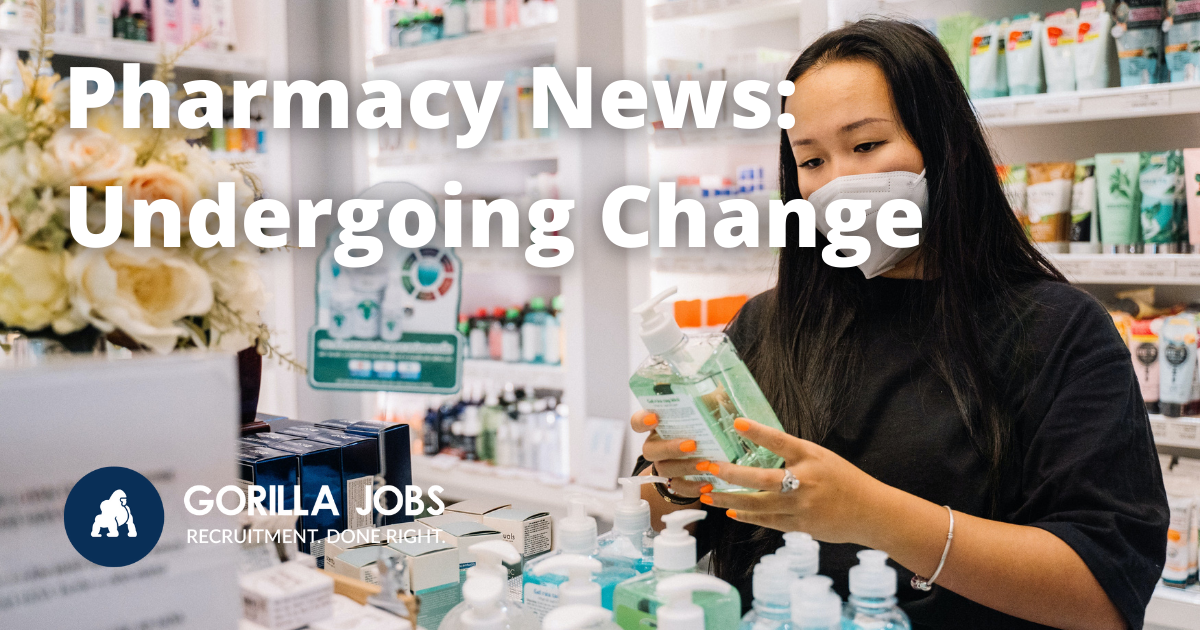 The pharmacy sector is in the middle of change that could have long-reaching consequences for those in pharmacy jobs and consumers alike.

While most sectors face structural change, often correlated to technological change, there are times when particular sectors face more change than others. Throw in a global pandemic like the two-year COVID rollercoaster ride we have just endured and change can be magnified even more.

The pharmacy sector has risen admirably to the challenges COVID threw at it, stepping in to help manage the healthcare response. Carefully navigating the obstacles of social distancing, the greater use of digital systems – such as health records and e-scripts – and a customer base uncertain and frustrated by the pandemic, those in pharmacy jobs stood firmly at the frontline ensuring vital medicines were delivered to the community.

Importantly, they were also involved with the COVID vaccine rollout and stepped up to offer under-pressure GPs extra support by providing advice on managing chronic health conditions and improving health literacy.

New players in a transforming sector

Happening underneath this exemplary effort by the pharmacy sector were the rumblings of greater long-term change that are likely to affect how the sector operates well into the future.

As reported back in late 2020, the pharmacy sector looked set to face massive change with the news that “Amazon is Coming”.

Having successfully launched “Amazon Pharmacy” in the USA, it seemed clear from their application for a similar trademark in Australia (lodged as far back as September 2019) that they were looking to push into the Australian pharmacy sector next.

However, in the middle of 2021, their trademark lodgement was withdrawn, with many pharmacists, no doubt, breathing a sigh of relief. But don’t get too comfortable!

The story looks still to play out, with Amazon lodging another trademark application for the brand “Basic Care” that would offer over-the-counter medications. Stay tuned!

Possibly sensing an opportunity with Amazon slowing down its push into the Australian pharmacy sector, Chemist 2 U ramped up its efforts to fill the gap Amazon’s withdrawal created.

Having already begun establishing itself as a pharmacy delivery service, it teamed up with Healthengine in 2021 to offer even greater access and ease around its service.

Healthengine co-founder and CEO Dr Marcus Tan said his company was “excited about offering a new service that supports Healthengine users after they leave their doctor with a paper prescription or e-script in hand.”

Dr Matthew Cullen, founder and CEO of Chemist2U, agreed, saying, “This partnership is a natural extension of Chemist2U’s vision to help make the consumer experience with pharmacy both more digital and convenient.”

The other even more seismic shift in the pharmacy sector came from the decision of massive conglomerate Wesfarmers – owner of successful retail chains Bunnings, Officeworks and K-mart – played its hand in a sign it was ready to make a move into the health and wellbeing sector.

In July 2021, Wesfarmers launched a bid for Australian Pharmaceutical Industries (API), owner of the widespread Priceline and Soul Pattinson pharmacy chains, with the market reacting favourably, and API shares jumping nearly 20% on the news. In the proceeding months, API recommended to shareholders to accept the bid…that is until another retail giant stepped in to challenge.

Supermarket giant Woolworths lobbed a markedly higher counterbid that took many by surprise and which was almost immediately deemed the superior offer. However, from the moment Woolworths entered the fray, concerns were voiced about the bid on several grounds, with the main fear by some being that the takeover might dampen competition by Woolworths possibly setting up its own pharmacies in-house as it currently does in its NZ-owned stores, Countdown.

The Pharmacy Guild also raised concerns about Woolworths other commercial interests around alcohol, tobacco and gambling that seemed in stark contrast to offering healthcare.

Wesfarmers also rose to the fore, purchasing more shares in API to hit nearly a 20% holding, meaning that getting approval from a majority of shareholders for the Woolworths bid might prove nigh impossible. This move, and possibly the thought of being blocked by the ACCC, seemed to have the desired effect.

In early January 2022, Woolworths withdrew its bid, with CEO Brad Banducci stating in an ASX announcement that Woolworths was “not able to validate the financial returns it requires in line with the group’s allocation framework”.

This seems to have cleared the way for the Wesfarmers bid, although the takeover still has to navigate regulatory hurdles and be approved by shareholders. So, for the foreseeable future and beyond as we witness even more technological change and other challenges such as COVID, the pharmacy sector looks set to undergo transformation that will potentially be for the benefit of consumers, those in pharmacy jobs and the sector more broadly.