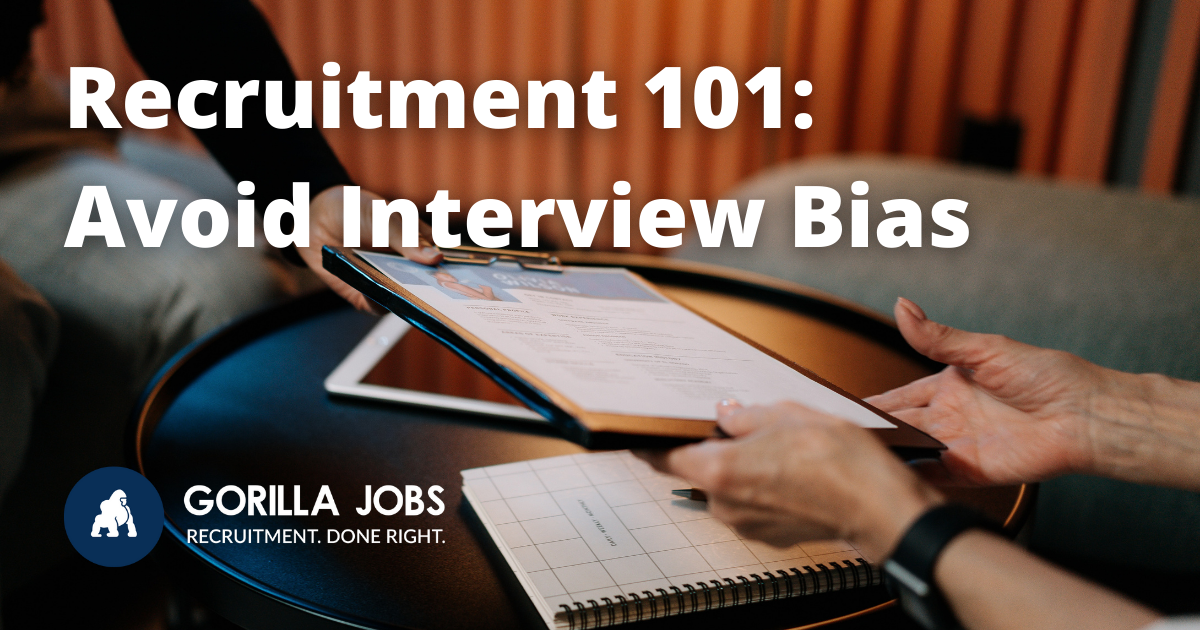 Getting the best candidate for the job lies at the heart of Recruitment 101 but sometimes interview bias creeps in. Here’s how to avoid it.

From gender to race to age to disability, and the many other distinguishing aspects we humans have, the Western world strives for a level of equality that puts these aside and ensures everyone is treated equally. Recruitment is no exception.

The underlying principle of recruitment is simple: to hire the best person for the role. This is regardless of any personal aspect or attribute a candidate has, although, admittedly, sometimes personal attributes come into play when assessing soft skills.

Bias does, however, creep into the recruiting process, even though it may be unconscious. Partially in response to this, the concept of “blind recruitment” was born to combat unfair hiring practices. This is where a candidate’s CV is “de-personalised” to ensure interview selection occurs based on the candidate’s skills and experience.

However, there are some disadvantages, including that it:

And, of course, even if you do start the recruitment process “blind”, bias still usually creeps in during the interview stage.

To be on the lookout for bias in the interview process, it’s important to recognise the various kinds.

With so many ways bias can creep into the interview, is there a way to avoid it? The answer is yes…mostly.

Try as much as possible to cast a wide net during the early stages of recruitment, using a variety of channels to get the most diverse mix of candidates.

When putting together a shortlist, even though you may be working to recruit to a set of essential skills, include candidates who only tick 75% of the boxes but who have a different value-add of some kind. And, if you’re not blind recruiting, make conscious decisions to include a diverse mix of gender, race, age, educational background etc.

3. Use an interview guide

By having an organisational interview guide you ensure consistency across interviews so that all candidates get the same experience during the process.

Avoid inconsistent questioning and “similar to me bias” by asking the same set of questions to all candidates. This doesn’t mean you won’t go slightly off-script, especially for some candidates who present with slightly different skill sets you want to know more about, but it will at least ensure a more level playing field.

By using a rubric to determine which skills are essential, and then looking at these individually, you will avoid many of the biases, particularly stereotyping, first impression bias, and the contrast effect.

6. Use an anonymous test

At some point in the recruitment process do some anonymous written testing to allow you to judge the response without bias. For example, in a GP interview, create a scenario that may arise during a normal day in the clinic and ask how they would handle this.

While some candidates may feel more anxious fronting more than one interviewer, it’s ultimately to their benefit. With several people involved, biases can cancel each other out and lead to a much more objective overview of each candidate.

8. Leave overly casual chat (and politics!) out of it

Assessing cultural fit is crucial, and getting a holistic understanding of the interviewee is a way to get a feel for this. However, don’t let the interview become too familiar or veer off-topic into the expression of personal viewpoints (particularly politics!). Letting this happen will nearly always lead to affinity bias and cultural noise bias slipping into the process.

While a lot can be said about gut instinct in our broader lives, steer away from it in interviews as it is ultimately a disguised bias.

10. Take a breath after the interviews

There may be some urgency with the hiring process, particularly if you become aware that some candidates are up for multiple roles, but this doesn’t warrant making a rushed decision. Discuss the candidates with the rest of the panel and reach a group consensus about how to proceed.

If you need help with your recruitment process, Gorilla Jobs can help. Reach out to us today and let’s get you the best candidate – without the bias!